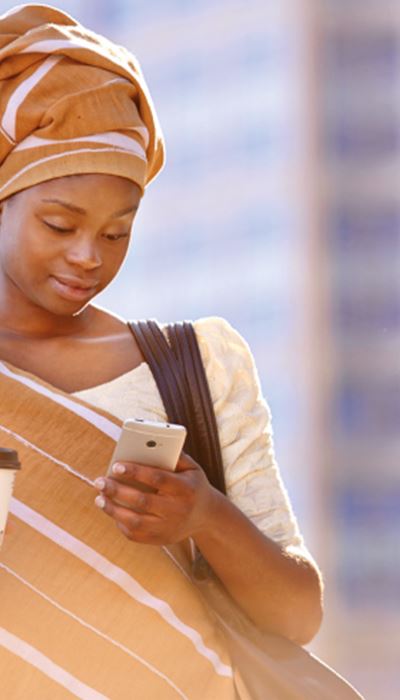 The consumers being shaped by the FinTech revolution

When you picture a young, economically optimistic, mobile-savvy consumer,[1] it’s unlikely that you think of a sub-Saharan African. Prepare for that to change. The lack of traditional infrastructure may have held Africa’s economic development back in the past. Now, the rise in satellite servers is powering what some call the “fourth industrial revolution”. And it’s propelling the continent’s 1.2 billion inhabitants into the digital world.

Going mobile is the spark

Mobile network coverage has had a huge impact on the continent’s development. In Ethiopia, the government openly focused efforts to expand the state-owned telecoms network and improve quality. Coverage expanded out of the cities to reach almost 100% of the population. Mobile phone subscriptions soared from six million in 2011 to 46 million, or 76% of Ethiopia’s adult population, by June 2016. And now an additional 1.5 million new subscribers sign up for a mobile contract every month.[2]

Access to financial services has been transformed by mobile broadband leapfrogging the need for a traditional infrastructure.

Mobile payments can lower the cost of providing financial services by 80 to 90%.[3] This is making a massive difference to the types of lending and support available. For example, over 70% of Kenya's adult population[4] now use Vodafone’s mobile-payment service, M-Pesa, which was launched in 2007.

This has opened the door to the innovators. In 2013, BitPesa was the first to create a market for digital “crypto” currencies in the region. It uses blockchain technology to make payments in Nigeria, Kenya, Uganda, Tanzania and DRC. BitPesa enables settlements directly between African banks and customers’ mobile money accounts. Organisations can send payments directly to employees, distributors or suppliers. They can also collect payments from African customers in their own local currency. Suddenly it has become possible to support cross-border trade within the African continent and beyond. All without the stress, time delays and cost of international bank wires and multiple broker fees.

As the ecommerce, money-transfer platforms, gaming and microfinancing markets mature, they will attract increasing attention from international regulators and governments. These bodies will want to see that the right compliance and regulatory processes are in place to confirm the authenticity of both transaction and consumer. M-Pesa relies on users sending and receiving credit that is redeemed through a local agent, bypassing the need for any form of bank account. This presents mobile service providers with a challenge. They will need to build in identity authentication in a way that can be easily scaled and applied internationally. It won’t be enough simply to rely on people to check documents and ID, or to handle cash transfers. Human error or corruption will erode confidence in the payment process and, without a high level of confidence and trust, the full potential of this vast continent will not be reached.

What does the future hold?

The future for African consumers is bright.

17.4% of Africa’s population now have access to mobile broadband. By 2020, the number of smartphones is expected to exceed 700 million.[5]

That’s more than twice North America and close to the total in Europe. Mobile data traffic across the continent looks set to increase 15-fold.[6] The ecommerce sector has even spawned Africa’s first tech “unicorn”. The Africa Internet Group (AIG) is its answer to Amazon.

Clearly, the potential economic impact of digital and mobile finance is enormous. Around 330 million of African adults don’t have access to traditional banking services.[7] FinTech and mobile payments look set to play a vital role in the continent’s rapid economic development.